Long-lived fromer Tir High Prince. Has many works published on magical theory and the Sixth World. Appears to be Jane’s employer/mentor, rumored to be her illegitimate father.

Lodestone heard a rumor/conspiracy theory that Ehran is an ‘Immortal Elf’, which are said to be caused by dragons interbreeding with metahumans (a practice since banned). Regardless of the truth of this theory, Ehran seems to have access to a variety of spells and magical techniques not commonly known in the 6th World. Uses the name ‘Aaron Johnson’ when hiring runners. Works for/with DIMR, the Dunkelzahn Institute for Magical Research.

May have posed as a human named Walter BrightWater in Salish lands prior to his appearance under his current name. WBW was one of the leading forces in convincing the Salish to open their borders to metahumans before his “death” in 2028. This allowed Lugh Surehand to gather power locally, and eventually form Tir Tairngire out of formerly Salish lands in 2040.

Used to post on Shadowland as Wordsmyth before everyone switched to Jackpoint. This is a likely an in-joke referring to speculation that Ehran, using the name “Francis Bacon”, composed Shakespeare’s work. Has a longstanding on-again, off-again feud with Harlequin, who took over Jane’s instruction after besting Ehran in a duel in the 2050’s. 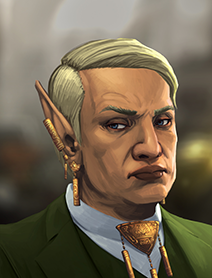