McCormick is a LoneStar detective, who seems to have taken a special interest in the activities of Mars City terrorist Andoras Hamshallow, as well as his various connections. He is also involved into the investigation into Arlen Thompson’s murder. Was tracking Lodestone, and followed him back to Earth. Looking into his death as well now.

He’s been following Hamshallow’s international trail, and is digging into the Exchange war, while on an extended duration loan to an Interpol Task Force. 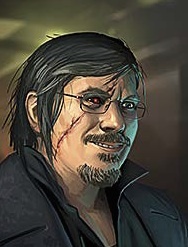