The enigmatic Daedelus was extracted by the team from the Renraku arcology outside of Mars City. It has begun setting up an increasingly fortified warehouse and factory for unknown purposes. However, it pays well, and seems to like the team members well enough, altough having 4 different Japanese corp heads talk to you all at once off the top of weird cyber skeletons is a little off putting. But anything for the big bucks, right? Daedelus seems to be eerily omniscient of the team’s current activities, locations, and plans. Previously known as “mother.”

Daedelus recently sacrificed 3 of its longtime bodies to fake its own death, at the hands of the Turing Army. However, it seems some of Daedelus’ longterm plans came to fruition first, as it launched a massive harddrive into space aboard a stolen satellite. It also uploaded a mysterious data packet to all SETI satellites and monitoring systems, either to prevent them from tracking its newly launched satellite or for other unknown purposes.

Involved in running the Exchange. Recently entered a war against itself, as one of it’s iterations merged with Deus when brought into the ACHE by Thankyou. Having been originally been created from segments of Deus’ core code, it is unclear which of the 2 benefited more from the merger. 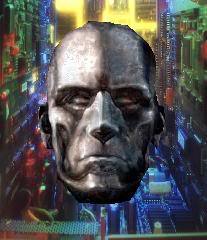