Mid 20’s human with a lot of prison tattoos. Apparently did six years on Deimos for boosting cars in the upper city, and learned a lot in a trade program there. Luckily he was only 12 when he got caught, so he didn’t get it as bad as he might have. Some people on the moon still got hope for the youngsters at least.

Works as a body shop mechanic-legal and illegal, if it travels on ground, water, or air, he can fix it. Ivan managed to greatly impress with outlandish tales of adventures around the planet, as well as with his own repair skills, and he gave him a good deal. Nothing like new friends, eh?

Thankyou and Tobias Cheney managed to get him off Mars using Exchange resources, and he is primarily their “in-house” mechanic now. 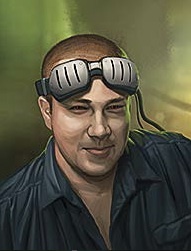