Hermes Entertainment Corps’ biggest star. One of the more successful of a batch of young actresses looking to follow in the footsteps of Jina Eson, Yvonne is attempting to secure her brand with the old “I only need one name” trick. Still hasn’t quite hit the big time. She recently suffered a tragic loss, when her lover, the ex-model Sebastien, overdosed on a deadly cocktail of street drugs in an undercity drug den. Although he was rushed to a nearby hospital, it was too late to save him. Many analysts and message board denizens haver actually suggested that this will be good for Yvonne’s career, however, as Sebastien had been a huge drain on her for months. Some have even gone so far as to suggest that Hermes could have staged his “accidental” overdose to get him out of the picture…..

In LA, trying to make it using the Mars Survivor angle, once again following in Jina’s footsteps. 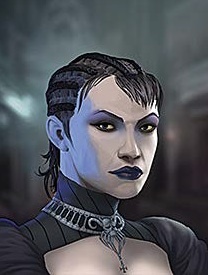