Ex-Israeli, now his only friends are stray animals. but he will steal your gun and hit you with it if you mock his grief.

Asp had worked for the Egyptians before the schism, and figured there might be some work there, but Heliopolis is suspicious of outsiders, fearing assassins from the Pharoah. Mostly has been doing odd jobs and animal rescue, barely scraping by. (Meta)-humanitarian. Skilled in Krav Maga, the IDF martial art based on rapid and brutal disarming and takedown, as well as a variety of weapons use.

Has a dark past in Israel, and seems to be overcome with the grief of loss sometimes. Fears water spirits, and gives off an overly obvious astral signature. Was one of the few survivors of the Augmented Soldier Program.

After his beloved dog lefty was killed on a job, he began to slide into insanity, and was killed on Deimos Prison Moon while saving the rest of the team from certain death at the hands of a mini-mech. except for Ramose-hotep, who was also killed in the explosion. but everyone else was fun. 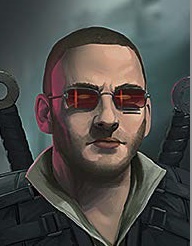