Buys and sells just about anything. Connection 4

Ango is a male dwarf. Likes sleeveless shirts and neothrash. He works mostly as a fence and arms dealer, but also sometimes passes along jobs to the team. He was the one who figured out Remus’ matrix chess match codes, and passed the word on to Scrounge to put together a team and do some quick extraction work. He wasn’t careful enough trying to sell off the data that the team stole from Weyland-Yutani, however, and got himself caught.

Luckily, Scrounge sensed an ambush, and the team avoided death or capture and even rescued Ango. He has felt a debt of gratitude since then, and has done the team a number of favors, as well as passing them quality work when he has it. Has a grudge against Renraku-his brother was killed in the Seattle arcology disaster.

Ties to the Red Vory. Got back to Earth during the nanopocalypse, and set up shop in Boston, down in the catacombs, where he has been smuggling and selling weaponry out of Legit’s Weapons, as the 2nd in command to Legit himself. 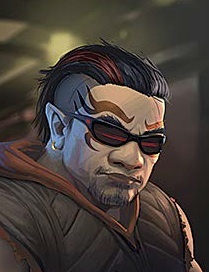