A surly barkeep and sandwichmaker

Fat Carl is indeed fat-mostly due to the quality of his famous subs, which are surprisingly affordable for the decent ingredients he uses. The meats and cheeses might mostly be soy, gluten, algae, or kelp based, but boy are they quality. In his 60’s now, he retired from a life of crime and opened up a bar on Mars. However, his lifelong rivalry with his twin Hot Carl continues: he still works as an uppercity cop. Fat Carl has a graying receded ponytail and walrus mustache, as well as no-bullshit attitude. So make your order and get out of his face. Unless you’re looking for info-he’s a veritable font of undercity gossip, and is relied upon heavily by many shadowrunners, gangsters, and regular citizens trying to survive the perils of life in the slums. His bar is located in Mad Martians turf, and he provided early assistance to both Barry and Scrounge after their arrivals in Mars City.

Killed during riots around the nanopocalypse. 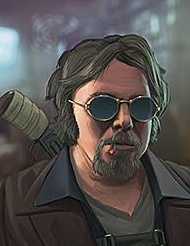