Newish on Mars. Japanese, old combat fatigues, dirty and unkempt. Specializes in magic and surveillance. Likes to see the powerful brought down a notch. 5’3", early 30’s. Fled Japan after his Yakuza association turned sour, fortunately rats saved him in the sewers, and he embarked on the path of the Rat Shaman. Striking Crane Clan, and his main rival (and former friend), a cat shaman named Scratch, continue to pursue him. He won’t tell anyone exactly what he did to get them so pissed. Lives in the sewers under Problem Children territory, after his mana lodge was raided and destroyed by presumed Yakuza hitmen. Good at disguises.

Retired after the tramautic Deimos prison moon run, taking only a small part of the reward. Still does occasional surveillance work. Believed to have been killed by Halfman, and possibly eaten by Longpig. 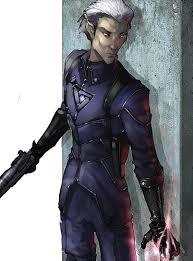