Everyone in the shadows knows his name, and most know some rumors about the metapeople he has offed in huge numbers, but nobody knows the first thing about what he looks lie, or even what he is (or if “he” is even a he). Anyone who tells you they do is talking pure drek. This guy hasn’t stayed alive this long by letting anybody who sees him survive. Supposedly has a 100% success rate on his hits. Not somebody to fuck with, for sure. Rumor is he’s undergone massive cyber-reconstruction, and that he’ll kill you as soon as look at you (if not quicker). ‘Course, everyone thinks he’s just a legend, a story, something to spook yourself with at night (“better be careful on that run, or they might send Halfman after you”). But now the word is he’s on Mars. Looking for somebody. But apparently he’s very selective, not to mention expensive, and you have pissed off anybody that powerful lately, have you?

He encountered the team during a bank heist, and although being attacked by multiple team members on two planes, managed to hold his own. He is about 6’5", and appears to have originally been a human male. He has a cybergun arm containing a minigun, which is generally camoflagued within a flesh shell. His aura on the astral plane seems to be imprisoned in some fashion, but is capable of attacking other astral presences. He escaped in a stolen SWAT van after the team bailed in Ivan’s car. Where has he gone? And when will he next appear?

after killing scrounge, and hunting the team through the matrix and the undercity, was killed by a guass rifle shot to the head in Longpig’s fortress 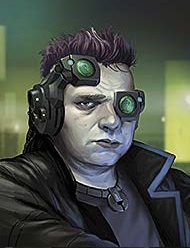