The man himself! Or so he’d like you to think. A caucasian male human in his mid 40’s, 1-Shot Wade (supposedly named in mockery of his abysmal aim) is the leader of the Problem Children, one of the up and coming street gangs cutting out turf amidst the struts of the undercity. He has a massive scar on his face from an old brawl. Ivan worked for a while with his cousin in Seattle. An amateur gun collector, he recently scored a real coup: a pair of US Colt Cavalry pistols from the late 1800’s, stolen from his rival gang boss Long Pig by some runners under his employ. Wade had planned to be killing Long Pig about the time the pistols were stolen, but was instead caught in a hospital ambush (those Black Shadows are devious), from which he barely escaped alive. The guns are a nice consolation prize, though.

Helped arrange the downfall of the Black Shadows. Took control of the Mad Martians after arranging Yoleus’ death. Was himself killed during the nanopocalypse. 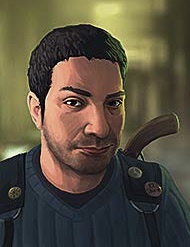