When I landed on Mars, I knew how to do two things: Rig a cab, and spot a healthy kidney. The Prometheus cab company got me set up with a cab job, and One Shot Wade got me set up with a connoisseur of the wetter side of martian civilian life, Doc Todd. He’s got a deluxe set up: a legitimate cover business in the lower city, where he stitches my chums and I up after our bloody explosive runs, and a quiet little get away in the sticks of the Martian outer territories where he explores the finer points of kidney harvesting, implants and cortex bombing. Stand up cutter, in my opinion.

Dr. Todd is a late-50’s African human. He speaks a number of languages fairly well, and is a skilled surgeon. Know one’s sure why he fled Earth, but most people on Mars know better than to ask too many questions. He works at a legit clinic in the undercity, where he fixes folks up and whatnot, and also has an illicit clinic concealed under an unassuming shack in the wastelands where he performs the less legal surgeries at which he is skilled.

Down in Lagos, working with Samson, having gotten off Mars while the getting was good. Works as a procurer for Tamanous. 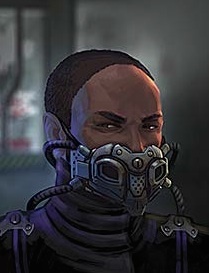