Dark-skinned African Orc. Built like a mountain. Deceased (though his body survives).

Strives to be the the strongest, most powerful beast on the planet. Welcomes any conflict.

Zuberi was raised in a small tribe in central Africa, whose religious tradition holds that their afterlife, the Dark Realm, is the only true afterlife. However, to wind up there, appropriate rites must be performed following your death. Their myths hold that one day, a child will be born who will send all of the the world to the Dark Realm. According to careful calculations, auguries, heiruspecies, and scrying, the tribal elders confirmed at his birth that Zuberi was this child.

He was raised as a sort of dark chosen one: although his coming had been long looked for, he was destined to end the world as it is. So he had an odd relationship with fellow members of his tribe growing up. However, this only encouraged him to train harder, and excel above all else at his disciplines: magic and hand-to-hand combat. He views any conflict as a means to further advance his strength and abilities. He ventured out into the world at a young age, to begin sending souls to the Dark Realm, and has continued ever since.

His tribe just call themselves “The People” in their local dialect (which is spoken by very few nowadays). The tribe has a strict division between the spiritual and the mundane, the spiritiual being the men’s realm, and the mundane being the woman’s realm. For this reason, they are often thought to be a matriarchy, although this is not exactly correct, as the spiritual realm is a core part of tribal life. God-figures tend to be powerful or legendary ancestors, generally summoned as spirits of man if needed for direct consultation, although this is exceedingly rare as souls are not supposed to return from the Dark Realm.

Lodestone chose to put Zuberi in a permanent vegetative state, with help from some ex-Tir Paladins working for Ehran the Scribe, after Zuberi refused to renounce the Dark Realm, after revelations about the DR’s true nature as a sacrifice plane for a slaughter spirit. 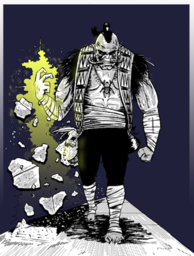