Hermaphroditic leader of the Mad Martians

A charismatic and popular leader, who inspires great loyalty in their soldiers. Yoleus undergoes gender reassignment surgery every few years, and is currently in a female phase. Under her leadership, the Mad Martians have earned a reputation as the most metahuman friendly street gang in Mars City, a useful recruiting tool for powerful metatypes such as trolls and orks, who often flee to Mars to avoid persecution and/or prosecution in their homelands. Since allying with Problem Children leader One-Shot Wade, Yoleus has expanded the Mad Martians reach, and now needs to expand their businesses to take advantage of the increased territory-if she can hold it from the Black Shadows.

Betrayed by Wade and killed in a trap, after which he took over the gang. 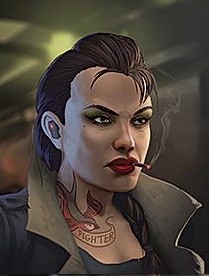