Putting the art back in escape artist. Connection 4

A bald, red-bearded Persian elf in his late 30’s. Physically fit and well-muscled without being bulky. Performs under the stage name of “The Escapist.” Also works as a safe cracker and housebreaker on the side. Skilled at infiltration and quiet takedowns. So far has aided the team in their fight against Long Pig and the Black Shadows. Insisted in freeing all the captives it Long Pig’s dungeon, saying that he hated to see people confined to chains. Was tortured (physically and in VR, leaving him scorched) during his stay at Long Pig’s, and probably holds a bit of a grudge for that, as well as for getting caught in the first place. However, he proved essential to the team’s escape. He also worked in cooperation with 1-Shot Wade on a heist job against the Black Shadow’s money laundering set-up, using the data the team stole from Long Pig’s.

Works mostly for the Exchange these days, and has been spotted on Earth recently. He seems to go back a ways with Daedelus, having been on a job for him when the team first met him. 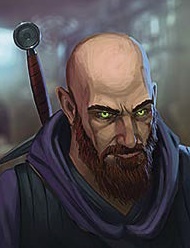