A pink (now dyed blue) skinned 20 year old. 6 ft tall, thick but not fat. Really wants to prove himself, especially to Ultraman, his idol and namesake. Very heavy into current ork trends. Spends his free time impulsively blowing things up with his grenade launcher, sometimes surprising himself and others with his skill. Hates the Mars countryside, it’s filled with fraggin’ ghoul hillbillies…
He helped Mad Martians boss Yoleus escape the hospital ambush.

UltaBoy! is a psychopathic gang-banging beer-guzzling pyromaniac…
Stout, lavender skin, male Ork. Has a bad mohawk haircut, wrap around sunglasses, exposed data-jack cybernetic on the side of his scalp, missing one ear. Wearing “Prime Runners” t-shirt (Shadowrunner reality TV show), grey baggy sweat-pants, black tanker-boots.
Cybernetic left hand with “wolverine claws” (three blades coming out the top of hand), Katana sword slung on his back, holding a six-pack of beer in his right hand, wearing a bandolier of grenades. Probably there are some explosions in the background…

Walter Turnip was raised on Earth by overly protective parents. He developed a metahuman obsession at an early age and was filled with jealously any time a neighborhood kid went through goblinization. He eagerly awaited his “glorious change”, but it never came. This obsession turned into bitter hatred for himself and pure human society, Walter became more violent and “Ork-like”, he mutilated his body and emulated Ork gamgbangers, collecting trideos of infamous Orks, his favorite was always the now retired shadowrunner Ultraman. When Walter was 16 his parents were killed by a runaway truck, he inherited two hundred thousand Nuyen. Walter dropped out of school and spent most of the money on extensive cosmetic surgery to make his metahuman dream a reality. Walter was reborn as an Ork to the streets and started using the handle “Ultraboy!” in honor of his favorite Ork. He found the street thug life prosperous and soon worked his way into the ranks of various Ork poser and Thriller gangs, ultimately joining a Boostergang where he received much of his cyberware implants. Ultraboy! recently decided to spend the rest of his inheritance and move to Mars after receiving a reply from an old fan mail letter he sent to Ultraman, postmarked Mars City.

Ultraboy! is amazed he’s still alive… maybe it’s time to take a step back and get some perspective on this crazy life. First off, there’s a ton of Black Shadow’s turf open for new business, if the Problem Children and Jaro can be rallied around UB! (impress them with his latest and greatest exploits and increased funds) they could claim some BS blocks for themselves, hole up against any Lone Star activity. If any other gangs are in the mix UB! will propose a team-up or he’ll lead an all out attack to wipe them out (Mad Martians excluded), UB! wants Ivan in on this, he could use a break and could just sit back and run a gang for a change, his influence goes farther than UB!‘s. UB!’s new SIN could be that of some low level ork crook… although he is considering a full cosmetic reversal, maybe its time to be human again… ah, changes…
1. Get the PC/Jaro together, convince them UB! (Ivan) is the man in charge
2. Claim some nice BS real estate
3. Take-out/team up
4. Watch the NuYen roll in!
easy!

UB! is now working for an elite KE black-ops squad, tracking down various hard targets. This promises to pay well, and KE has sworn to help set him up with his own undercity turf someday if he cooperates, as well as ensuring that UB!’s lover, Jaro, gets lenient treatment.

Continued in: A Betrayal on a Distant World

He was most recently spotted in Chicago, helping UltraMan work on some explosives the best he can, given his current limited mental capacities and shaky hands. He is back to going by “Walter Turnip” and once again looks human, though patches of skin still show his lavender dye-job. 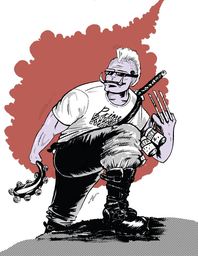