Thank You is tall, lean but muscular. He is from a small tribe in southern Africa. When he was pretty young he was fitted with very large cyber arms, one of which has a SMG in the palm. He lately wears pretty light cammo armor that has been damaged by an acid spray. All his gear is modified to either expose his gigantic arms (which are very heavily armored) or modified to cover them. He has very scruffy facial hair and a shaved head and a pretty boney face. He is also completely out of his mind, and has a fair amount of trouble keeping track of who he is and what he is supposed to be doing, and has a hard time empathizing with “humans” and “pain”

He is able to interface with vehicles and drones with his mind, and has several small flying drones as well as a rolling eyeball.

His tribe was wiped out when he was young, and he was mortally wounded in the attack. He awoke in a hospital, having been rescued and rebuilt by a mysterious benefactor. This person or group has occasionally guided his actions since, while he traverses Africa pretending to be a Xhosa tribesmen, and longing for revenge….

He recently was hired to travel to Mars City carrying a sensitive package that his team had gone to great lengths to retrieve from a military base near Cape Town. He has been getting steady work both running and driving for the Problem Children, and making far more money that he ever did on Earth. While on a mission that took him through an astral rift onto the insect plane, his superstitions convinced him to abandon his long-running charade and openly embrace his original tribal identity.

Recently discovered that he was/is an experimental test subject of the Gilgamesh Initiative, causing him to question many of his longterm beliefs about himself, his past, and his purpose, as well as to become aware of his dangerous level of cyberpsychosis.

After meeting Nelson Rosslee, he found out a lot more about his past, and his family growing up, memories he had assumed lost forever. With the help of Jane, and other Jackpoint members, he is assembling a software suite to help him emulate and eventually re-learn (potentially) some level of human empathy. He has developed a serious reliance on Jane as an ethical/practical sounding board, and trusts her completely. He has also been building a relationship with the AI SYD, allowing her to copy his empathy software, and warning her of some anti-AI threats, as well as calling on her for help with matrix research.

ThankYou decided to fake his own death to escape from The Order of St George, and also hopefully the Gilgamesh Initiative, and used the chaos during the assault on Alamais’ GeMiTo compound to do so. He warned a few of his most trusted contacts that he was going to be getting back in touch with a new name, but for the most part has burned the bridges to his previous life and ID, including letting Rosslee think him dead, fearing that Lodestone or the Gilgamesh Initiative might get info from him (if he wasn’t already working for them). Just because you’re paranoid doesn’t mean they aren’t watching you…

Changed his name to “Eckard Roberts” after faking his death. After assaulting a GI facility that April directed him to, he discovered that he was the one who killed all the people of his village, as his “first test.” The memories of being the only survivor are only partly true. He was apparently recruited out of a local militia due to his skills. He also finds out that there is at least 1 additional surviving GI test subject in addition to April (Halfman being dead, and having killed another at the base).

After having a very humanizing experience smoking deepweed with a bunch of teenage orphans in Chicago, just outside the CZ, he remembered some of his past. As Rosslee had told him, he left his village as a youth to attend a regional school, as he showed promise as a student. However, he never arrived, and they feared he had been killed by bandits or suffered some other misfortune. TY now recalls that he was abducted by a guerilla army, and forced into service, with intoxicants and collective punishment used as means of enforcement. He recalls doing some awful, awful things. 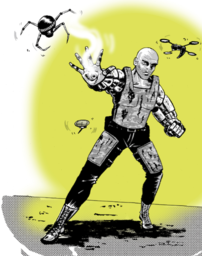