An honor-bound street sam, wired to the gills, who won’t work with the same team twice, and has no problem leaving a team high and dry if they don’t leave up to his moral code. He’ll sometimes work with an individual from a team again if he likes the way they operate.

Got stuck in Boston while tracking down A.J.‘s team for having slighted him on a run. Vowed revenge on AJ’s killers since they denied him the opportunity to repair this stain to his honor. Looking for a way out since completing his vow to his satisfaction. Died helping Chessick escape and defending Gateway project. 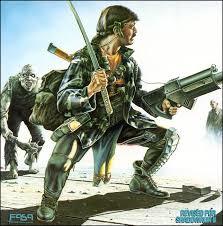