A European elf in his mid-50’s who recently transferred to the Mars City branch of Ares’ Experimental Publicity and Marketing Department. He was involved in damage control for SLEEP (the Sim Loyalty Enforcement Enhancement Program), which was tested in Europe in the mid-60’s. It was heavily reconstructed (and renamed) as the first batch of subjects didn’t turn out too well. He helped Rolf obtain his DiKoted arrows, and gave him some unofficial jobs assisting Ares’ interests.

Transferred back to Europe recently, and got assigned to the London office. Still supplies oddities to runners in exchange for favors useful to the corp. A whiff of scandal from his work on Mars has prevented him from advancing as rapidly as he might like. 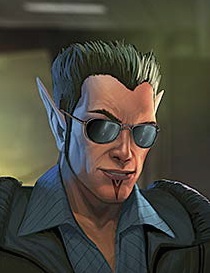