A wandering physician of the roving class of priests from the temple of Khonsu. He prefers to go by Sunny, although his name is officially Ra, which he feels is slightly pretentious for someone of his station. He does indeed possess a sunny demeanor, and almost a zen-like attitude towards life.

This doesn’t seem to conflict in his mind with his work as a master-poisoner, both a manufacturer and minister of sacred poisons used in a variety of sacred rituals, as well as in combat, by many schismatics. He has dark-brown skin and deep black eyes, and is in his late-40’s.

Working in the Middle East and the Indian subcontinent since he was forced to flee Heliopolis, and then Mars. He supposedly supplies to various Thuggee Cults, as he views Khonsu and Kali as 2 sides of the coin of death. 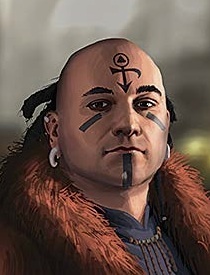