Simon is an odd individual. A full body changeling, he appears to be a bipedal lizard-man with thick scaly. He’s also a traditional British punk, wearing a battered leather vest covered in graffiti, anarchy symbols, and punk band buttons. He has a lizardfish frill running front to back on his head that he paints up like a multicolored Mohawk. He revels in being a freak, will hit on almost anything that moves, and likes to snack on live white mice.

He’s direct and in your face, but is utterly loyal to “Master Lofwyr,” and serves as the dragon’s eyes and ears in Chicago and elsewhere, working as an independent agent and fixer for Saeder-Krupp. Still considers himself a neo-Anarchist at heart, even though he is an extremely loyal company man (he sees himself as loyal to Lofwyr himself rather than the corp, for reason(s) unknown…).

May have made a powerful enemy by pranking Lin Yao Chang during the Artifact Rush. 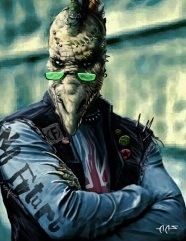