Ex-Seattle street ganger, leader of The Smoker’s Club, an assassin’s team. Knows a lot about street gangs. Infected with a mysterious illness (CFD) on the same run as Fastjack, he has possibly been targeting some JP members since his banning from the board. Yankee mentored him when he was coming up, though this may have come back to bite him as Riser (or Riser 2.0?) has been going after the SC hard since he got infected.

Has been trying to get back on JP recently, as his personalities have merged (he/it claims) and he is more stable now. Seems to still be as cold-hearted and professional as ever, and has no qualms taking wetwork jobs against other Head Cases.

He was killed by The Smoker’s Club after Rigger X sold him out while he was passing along a datafile for JP. 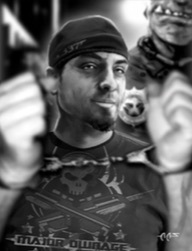