No, you're thinking of my brother. That sonofabitch.

A talented decker. Entered the shadows after fleeing a Weyland-Yutani research tower as the facility was being liquidated. However, he still is wanted by both them and Aztechnology, as he failed to practice proper data security while hacking their mainframe. Skinny polynesian, sgort hair 5’10". Handsome enough, but a total nerd. Has a complex about his brother Romulus, who is far more successful and famous. 26 years old, 15 years on Mars. One of the corporate sponsored “founding children of Mars.”

After going missing for many months, Remus turned up as a member of Lone Star’s Prime Runner program. He was killed by the team while raiding their wasteland hideout.

It just burns me up.

So yeah, whatever, first children of Mars. Child prodigies. Rising stars. Perfect scores on our intelligence tests. A lifetime of opportunity. Why the hell did there have to be two of us?

I get it, it’s obvious. Mars = some new kind of Rome. He’s bigger, so he gets to be Romulus. I’m a little smaller, so I’m Remus. It’s such a big damn joke. No one believes in Mars as a new Rome, anyway. It’s too cold. Sure, it’ll be nicer when it’s all terraformed, but until then, this place is a shithole.

He’s not even my real brother! I mean, I’m pretty sure. I was really young when I got started in the program, but I remember there used to be more of us. And he was such an ass. I can’t believe I used to like him, and let him cheat off me for the tests. I shoulda been first. I shoulda been Romulus. He shoulda been some poor slot orphan that no one cares about. I should be dating the simstar. I should have the statues in the park. I should be the famous intellectual. The darling of the Mars City social elite.

At first, Weyland-Yutani seemed like a good option. They were willing to give me all the best implants, made me fast as hell. That’s kinda when I realized about my brother. I’ve heard that can happen. You don’t realize that people have screwed you over until you get the implants. They say that it removes your humanity. I say that it just makes you think more clearly, and allows you to see what’s really going on.

So yeah, working in the lab was fine. I mean, it was really easy. I had to work with a bunch of morons, and I would always finish early, but that just allowed me to play around with some hacking when no one was paying attention. Their data security was always a little too lax. Fortunately for me, this made me realize what was coming down the pike.

It was obvious to me that the Xenomorph project was a mistake at best. They had a bunch of idiots working on it. If they’d put me in charge of it, instead of making me work on a bunch of boring shit like advanced terraforming theory (Good job Remus, you’ve just made it possible to do it 2% faster! This’ll make us billions! Except not you. You’re creepy and weird. Your brother will take the profits that you earned.) and datatrail spoofing theory (In retrospect, this one was kinda useful. And they never knew half the shit that I researched on this particular project. Ya gotta play your cards close to your chest when those corporate watchdogs are looking over your shoulder). I guess it served them right.

So yeah. The morons in charge of the Xenomorph project failed to realize what was actually going on. I tried to warn them at first. Then they took away my privileges and kept me under constant surveillance. It was a little tricky getting a message to the outside, but I quickly realized that they would have no idea what I was doing if I played it cool. So yeah, I was the one who came up with the steganographic chess matches. I’m just glad that someone on the outside figured it out, and realized that there was enough incentive to spring me.

I’m sitting here now, in the Weyland-Yutani towers, waiting for this team (what do you call ‘em? Shadowringers?) to spring me. W-Y won’t let me live with what I know. This entire complex is going up in smoke. I just know it. I know that a lot of the muckety-mucks just happened to be on some sort of “corporate retreat” today. Also, I know all the secretaries that they are secretly slotting on the side happened to call in sick today. I know that Romulus decided to start short-selling W-Y stocks today. It’s all so obvious. Of course, no one else has realized this, but they are all morons, and deserve whatever fate they get.

So yeah. As soon as I get out of here, I’m working on a plan. I’m not gonna be some corporate genius under lock and key anymore. I’m gonna use my skills to take everyone down a notch. And my supposed brother? He’s a dead man. He’s the one that took my life away. Corps? I don’t trust them. You can never trust them. The only ones that you can trust are the ones that live real lives. SINless lives. So that’s what I’m gonna do. I’ll be a shadowringer myself, and take this city over. I don’t care how long it takes…

Oh shit, the tower’s going into lockdown now. That team had better get here soon. Fortunately for me, W-Y isn’t gonna have any essential personnel here, so no top-dollar corpsec. It’ll be the b-squad protecting this place. Hopefully these shadowringers are good enough to pull this off… 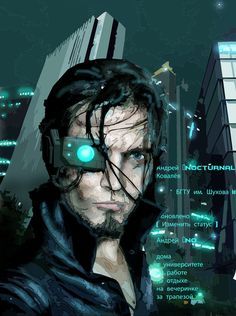