Ex-Israeli special forces commander. Now a krav maga instructor in Mars City. Helps get Asp some work from time to time-they worked together years ago in the IDF. Feels a sense of guilt over what happened in the Augmented Soldier Program, although he wasn’t directly involved in Asp’s wife’s death.

Fled Mars during the nanopocalypse, and ended up in Istanbul, still teaching at a dojo. Still has some connections in Israeli military intelligence. 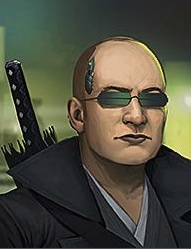