Leader of The Black Shadows

Long Pig is the leader of the Lower City gang known as The Black Shadows.

A vicious bastard with unusual tastes in both cuisine (human flesh) and art (more human flesh).

Was supposed to be under siege in a hospital somewhere, as the Problem Children arranged for a very nasty little surprise for him. The team kidnapped one of his boytoys (a clone, it was later discovered) and implanted a cranial bomb in him, which presumably severely injured Long Pig in flagrante delicto. To cap it all off, the team broke into his compound, shot up his rare animal collection, chainsawed up his art, blew a hole in his wall, inadvertently destroyed his control room, stole a bunch of his stuff, destroyed his clones (and equipment), killed his butcher, and made off with most of his prisoners. Good times. Unfortunately, he appears to have at least survived (health unknown), as the hospital was a brutal ambush for the Problem Children and Mad Martians. LP has also retained the services of legendary assassin Halfman, who has arrived in Mars City, and is hunting a certain group of runners who have been hitting prime Black Shadows spots. His orders are unknown, but it sure won’t be pretty….

Ivan met him, via biodrone, and found him to be somewhat stuck up ascetic looking human, appearing to be in his forties, european looking, long flowing silver hair. Turned out to be a mage, fairly powerful, killed himself by overcasting a massive lightning bolt into Rolph. Sold for parts to a mysterious organization by Ivan. Kept a creepy skin parchment kill book, which K held onto. 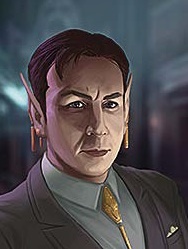