Lodestone is 37 year old Elf. His features are long and his eyes deeply sunken. He is skinny and lanky. His face is ugly but not severe, and he courts the ability to look bland and forgettable when needed, his affectations are not very impressive. He is no gesticulator, unless he’s being Stoker Gandry.
He usually wears a long dark trench coat, one which shows a good amount of wear and tear. He prefers to keep a wide-brimmed hat on his head, which he uses to obscure his obvious, non fancy cyber-eyes.
He does, however, have decorative ear-jewelery in both ears – wide loops and shards of white or black bone and preserved cartaledge from unknown animals – some of these are tribal and others are foci.
Also, he daily swallows a bullet. He prefers this bullet be submerged in a shot of whisky. This is his gaes ritual and it helps focus him. And yes, he does shit bullets; motherfuckers.

On earth he was raised in UCAS but needed to leave when he was hired to kidnap a politician’s kid, but was supposed to fail at the kidnapping. The job was set up by LoneStar to justify harsher enforcement of a suburban district somewhere and when he did actually get the kid there was no one at the pickup point. With the rest of his crew fragged on the mission, he killed the kid and fled to South Africa, and then left for Mars. That was two years ago.

On Mars he’s set himself up as a finder more than a kidnapper, although all the skills for one are very handy for the other. With his ability to use the detect individual spell (among others) he’s an insurance policy against kidnapping. He meets someone who may be kidnapped while they are on mars, and if they are, he’s forced to go find them. This type of work is not very good for him, mostly because he has to work with other totally random people who are the same kind of insurance policy he is. He dislikes having to rely on people he doesn’t know and is currently looking for a crew, having made enough money to step out of his extractor career if he chooses. Also, he’s getting a little tired of having to put up with rich fucking humans and their snotty fucking kids.

Back on Earth, LS decided to retire from the shadows after the Artifact Rush (and some draconic encounters) repeatedly nearly killed him. He moved to Karavan, and became Captain Miia’s 3rd husband. He passed Baelor on to a relative, who he thought would make better use of him these days, with Baelor’s permission of course. He believes he purchased his freedom from The Order of St George with significant amounts of inside info on the closing of the Watergate Rift, and intel about which dragons were there. They may or may not feel that he is still a member. He is currently hiding out in Karavan from pro-dragon factions hunting members of anti-dragon Orders. 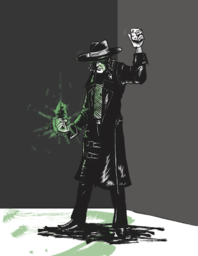