He was kidnapped by Black Shadows, and lost his legs sometime thereafter (he’s obviously a little hazy on details) when his family didn’t pay ransom. Long Pig may have feasted on them, but who can say? Maybe it was just a gesture. When the team reached the basement and began setting the captives free, “K” saw himself, 10 years ago, in Caruthers’ broken look. He levitated him the whole way thru the sewers while the team escaped, and then sent him with the other former prisoners to the hopsital. K promised to keep in touch, and hopes to act as a mentor.

Later, in the hospital, Caruthers was interviewed by minor Hermes news personality April O’Mally (who was looking rather ragged herself), in a disquieting segment, much of which never aired. April manged to insult and offend the visibly confused Caruthers on both the nature of his capture and captivity, and the loss of his legs, seeming to suggest that it was his fault. She also gave him a creepy and confusing wink. A visibly upset Caruthers then left the interview. O’Mally has since been placed on an open-ended leave from regular reporting.

Caruthers has since used K’s inspirational example of legelss achievement to work his way up in the family business: the Mafia. He has positioned himself as a behind the scenes manager and power broker, while using his brief moment in the spotlight after his rescue to make useful connections outside of organized crime. He has put together a young and multi-ethnic crew (being only part Italian himself), who are very loyal to him. His uncle and 2 nieces and nephews were recently killed in an upper city car bomb assassination, for which he has vowed revenge.

After getting “revenge” by lobotimizing UltraBoy! (who he didn’t realize was a fallguy for Tobias Cheney and others), he consolidated power on Mars, before returning to Earth during the CFD outbreak. He is now back in with the Milwaukee Mob on Chicago’s Northside. 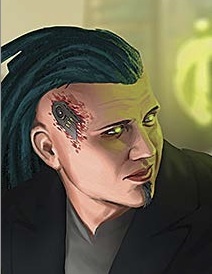