What's the point in careening around Mars City in a cab if you don't chop up a few passangers and sell their organs?

Tall, thin, and tough looking with a mohawk and a love for depressing industrial music. Feels a strong disconnect from metahumanity, partially a response to the night of rage. Late 50’s. Heavy into auto- and drone mechanics and rigging.

Ivan recently was promoted to a position directly under Wade in the Problem Children, and given a large chunk of former Black Shadows turf to manage with UB! and others. Ivan used his funds from the Insect Hive job to hire and equip some thugs to run his turf. He is also gaining prominence within the mysterious skin note faction….

I caught a rocket up to Mars City in 2039. Things were getting pretty hot on the west coast, the organlegger crew I ran with, the Alabaster Abattoir, was in rough shape. Tamanous was cornering the organ market, we were getting shot up by rival gangs, thrown into detention centers, and once the humans started burning us to death in fucking warehouses, I decided to get as far as I could from the emerald city.

It wasn’t long before I hooked up with One Shot Wade and the Problem Children. Something about stealing kidneys brings people together. The Problem ran things a lot more to my liking than the bureaucratic highbrows with Tamanous, they liked to do the business fast and dirty. Wade got me hooked up with Doc Todd, and business got good. I saved up and bought the biggest toughest cab I could find, the NightSky and got a auto-cannon mounted on top to deal with any complications.

Business got a little too good with our little turf war with the Black Shadows and the market got flooded Black Shadow parts. Lucky for me, having proved to the gang that I could handle myself as an entrepreneur, Wade got me hooked up with a group of Shadowrunners, and we’ve been tearing Mars City apart ever since.

Ivan was involved in low level gang activity in Seattle when the Night of Rage went down. Things got a little hot, and, CFCs or not, Ivan decided to cool things off a little in Mars City.

Things didn’t stay cool for long. His drunk driving ways led his independent cab company down a fast path to the lower city, where he caused a lot of trouble and ended up falling in with the Problem Children, headed by One Shot Wade. Wade hooked him up with Prometheus Cab Co, a gang controlled taxi stand operation. If a fare is giving him trouble, or looks pretty healthy, he sets them up with his mono-filament chain saw and they’re thrown in the refrigerated trunk of the cab and hauled over to Doc Todd’s “other” clinic for harvesting.

Post=spaceport:
He has himself altered to be a bit unnaturally pale, with a deliberately generic, almost fake looking face. 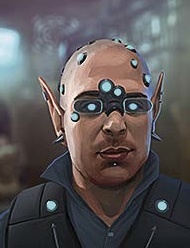