An experimental pilot gone brutally shadow crazy. Will stop at nothing for a rush. Formerly interested in torturing things. Recently deceased.

31 year old dwarven test pilot, employed by NeoNet. His bff Mikko Asparen does a similar job for Evo. 5 years in this career, before that, military service in UCAS. His parents gave him the boot when he showed a stronger interest in mechanics and engineering than in the natural world. He survives based solely on luck.

Currently in hiding (on his third facial reconstruction) in a Yakuza mechanics garage in the Upper City, Mars City, Mars. Continues to write Crod Stompaz music and release it to the populace. Trying not to get too depressed. Very interested in starting a new Under City gang. Races motorcycle for Yakuza. Not sure about his place in the world, feels maybe his days of insane stupid stunts are over, doesn’t know what he wants.

Born in what was once Iowa to Neo-Hippy Shamans Deborah and Gregory Bottow, Harmony was named after his parent’s favorite state of blissful unawareness. He prefers to go by Craig. People have recently been calling him HCB.

When he was 13 he modified his parent’s car to drive 230 mph, then took it for a joyride throughout the plain grasses of Iowa. On this same journey, he realized that, surprisingly, he was getting shorter. Had he a better view over the dash at the time, he perhaps wouldn’t have smashed the car into a house full of cats. He killed them, all the cats. Mere seconds before he came to a halting stop, he realized a talent that would forever change his life. For, when it dawned on him that he was not going to be able to take a hill and jump the house, instead of panicking like an gibbering child his mind seemed to calm down, his heart rate slowed, the world moved glacially around him, and he stopped thinking about anything. It was the most relaxed he’d ever been, and he faintly remembers yawning in serenity. CRASH He fucked up that house good. As he smashed through the car window, the colors of the house, red dead cats and green upholstery, were vivid, and he seemed to slide past them, moving his body in just the right way to minimize the amount of damage his fucking skull was about to endure. CLUNK

Awake at the hospital, his parents stood over him stroking his head. “Harmony,” said his mom, “Harmony. You’re going to be fine.” He could feel warm energy pulsing through her fingers into the wounded, throbbing spots on his head. His dad massaged his stomach. “And, we have a surprise for you, son.” His father winked. “You’ll be so happy!” His mother chimed in. Instead of saying another word they grabbed his charts from the end of the bed and showed him.

“Oh, hun,” his mom said, “Your father and I had always hoped we’d have a, you know, someone like you, because we want to face the challenges of growing up, you know, meta. We think it’s beautiful that you are so brave and we love you.” His father beamed; silent and idiotic. Two years later his parents enrolled him in a UCAS military academy. Harmony had become a troublesome, troll-techno-loving, technically minded, angry, risk-taking, swearing young man. But that’s how he was, and his parents excepted that. He had crashed thirteen different types of vehicle, but that’s who he was, and his parents knew that he was their child. He had punched his teacher in the face in every grade, but that’s who he was, and his parents loved him. Harmony was sent to military academy the day after he came home with his first piece of cyberware. Changing colors and textures constantly, a skull with a mohawk was projected in front of his face – a mask of rebellion.

“We barely even know you anymore,” they said, “Why do you hurt your parents like this?”

Post spaceport: He makes himself mildly attractive and cerulean blue. 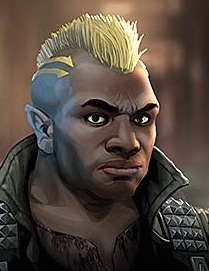