Human male in his early 40’s, coldly professional. Very non-distinct, unmemorable appearance. Has a team he trusts and uses for most jobs, although he also acts as a fixer for Kenneth Brackhaven. He usually chooses to lead his team in the field personally. He doesn’t have a reputation as a racist, personally, though he is willing to do whatever the job requires of him.

Sometimes utilizes Bios-Fear and the other Night Hunters when he needs some less subtle work done. 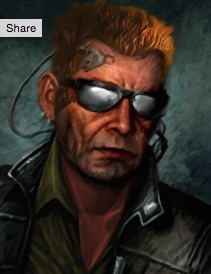