Likes to make things work, sell designs after testing. Total technomancer-phile, has a longstanding feud with Netcat, which has spilled off the boards into real life at times, including him selling her out to NeoNET, though she avoided capture.

He is an abrasive asshole who alienates almost everyone, but he’s also one of the most skilled hackers on Jackpoint, which is saying something. He is paranoid and spiteful, and has a looser morality than most in the shadows. He was the first to prove that something was going wrong with Fastjack, after much speculation from others, and has been researching the mysterious infection since.

Has a feral, proto-sapient AI “pet.” 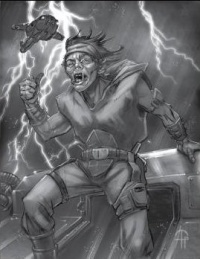