Foxtrot is an accident-prone, yet somehow providentially lucky bounty hunter. She has a special gift for damaging tech in unpredictable ways. She made her start in bail bonds in Detroit before teaming up with Moondog, a wolf shifter who was running her own solo op out of the PCC. Moondog is a tough one, and very protective of Foxtrot. They’ve brought down some impressive bounties between them, making some wonder if the ineptness is just an act…. 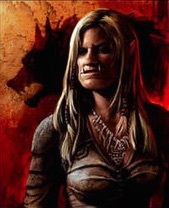