Ex-UCAS military, he got recruited into the private sector after proving his skills as a supply officer- not the most exciting job, but he had a rare knack for it. He is old friends with Piggy, having gone through bootcamp with her, and he may or may not be the father of one of her children (she has never told him, but there were sleeping together on and off in the right time period).

After she got discharged from the military, he used his new career and connections to get her work in the shadows (she had already helped out with a few jobs “on the side”), and he supplies her with explosives when needed, on the understanding that they won’t trace back to him. In-company fixers have made note, and have been giving Bob more responsibilities, and encouraging him to use other old military ties for more than just securing contracts. 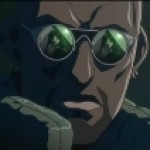