One of the mid-level Mad Martian leaders, Turgod is a female ork with a penchant for machine guns and explosive ammo. She aided her fellow MMs and a runner team on a raid on the spaceport to steal some experimental Aztechnology drugs, in return for MM’s getting a cut of the profits and a sample of the drugs.

Works as an LT in the joint organization under One Shot Wade.

One of the only MM’s to make it off of Mars during the nanopocalypse. Currently in Azania. Acting as a local enforcer for the Mungiki. 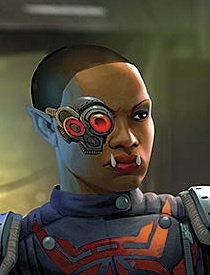